Jim Nash has been chasing the ghosts in his life for far too long. His business partner has deserted him and he doesn’t know if she’s coming back. His most recent receptionist and her dog, Friday, keeps handing him verbal abuse. The requested HR meeting never happens. And to top it off, he still hasn’t learned who orchestrated the death of both his wives. He can handle the missing partner. He can even handle the good-natured verbal abuse his receptionist dishes. What he can’t handle is the runaround he’s getting from someone who knows what happened to his wives and who should be taking the blame for their deaths. 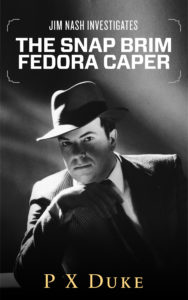 Private Investigator Jim Nash is the lucky recipient of an anniversary gift courtesy of his business partner Maddie Stone. All is not as it seems when he dons the gift and falls asleep while wearing it.

A mysterious woman searching for her husband. A man who doesn’t want to be found. Blackmail. Dirty pictures. All this and more as Nash goes into exhausting, sleepy overtime together with his partner’s faithful dog, Friday, to prevent the kidnapping of a little girl. 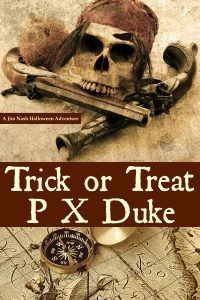 Here’s one of Jim Nash’s favorite Halloween short reads. Don’t be put off by the scary-looking image. It’s suitable to read to the little ones over a couple of nights as Halloween approaches.

On All Hallows’ Eve, Lily hears an old ghost story about Captain Kidd and his merry band of buccaneers burying booty on Pirate Cay. With childish steadfastness, she is determined to go treasure hunting with the gang when she becomes convinced she has discovered a long-lost treasure while trick or treating with Zelda, her faithful dog, on Halloween.

Drug smuggling on the Baja and people smuggling on the Horn of Africa lead to a rescue mission in East Africa and a one-way ticket back to Mexico. This is a collection of three previously-published stories. It includes a brand-new release entitled Lie Cheat Steal.

Dead Reckoning – During Harry’s well-deserved R&R on mainland Mexico, he picks up something he doesn’t own that forces him to flee across the Sea of Cortez to the Baja. While hiding out on an isolated beach, two mysterious gringas show up to complicate Harry’s life by attempting to implicate him in their own scheme, resulting in a mad dash up the Baja to escape the consequences of their actions.

Long Way Home – When Harry’s ex-wife, Sasha, and their daughter accompany her oil-company boyfriend on a working vacation to Africa, the trio goes missing. They get out a call for help that will lead Harry on an air and ground chase across the Horn of Africa to rescue his family before kidnappers can move them to their den on the Indian Ocean.

Payback – Harry’s comfortable family life is turned upside down when he learns that a former comrade long thought dead is alive and asking for help.

Lie Cheat Steal – The girls might be back in town, but that doesn’t mean that everything is going their way. In this sequel to Payback, Sasha’s drug-dealing past finally catches up to her, putting the lives of her husband and family and her closest friends in mortal danger. 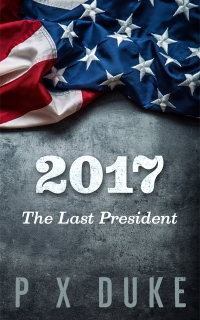 Russell finally accepts that he has escaped the purging of humanity from the city.  He hunkers down in an abandoned house in a suburb far from the city’s center. In the mess left behind, managing for his day-to-day needs occupies every waking hour. When he accidentally encounters someone else doing the same, he sets out to discover who it is that is trapped in a situation not dissimilar to his own.

The world he’s known may be no more, but Russell has a plan, and so far, he’s very happy with it. He has a roof over his head. He’s got the goods. He’s got the girl. His plan appears to be working. Then a wrench and a stranger are thrown into the mix, and it’s anybody’s guess as to who will eventually win to save the day and the relationship in a new and unforgiving land. 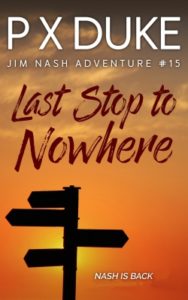 In Last Stop to Nowhere, Jim Nash is back, and this time he’s bent on revenge for his murdered wife. With a drowned hitch-hiker in tow who manages to convince him that he should drop everything and help her find her missing brother, Jim is drawn into the woman’s world of crooked friends, South American sicarios, and her innocent parents. Before he can say no, he finds her in his bed, in his life, and in no mood for him to say no as she draws him deeper into her world on the quest for her missing brother.

Being elected to the position of chief of police isn’t everything it’s cracked up to be when Jim has competent help to assist him. Bored with desk duty, Jim takes a short leave to use his P.I. license to help two sisters in their time of need. Persons unknown are harassing and threatening their high-tech startup business. To find out who, his quest leads him to gator country in the Florida Everglades, where he must separate business from the more than pleasurable sisters he is intent on protecting.

Startup Blues, the 14th short in the Jim Nash series, is up at Amazon, Apple, Barnes & Noble, Google Play, Kobo and Smashwords.

Jim Nash is as content as he’s ever been—that is, until he manages to get himself arrested thanks to the new girl that has come into his life. While being held on trumped-up charges of murder, all the women in his life come together to post bond. With the local PD’s enthusiasm to pin the crime on him, he is forced into honoring payback in a form he will find very familiar.

Jim Nash is well on his way to a complete recovery from events in his past life. He’s in his second marriage and very happy. His job at the resort complex is secure. Then a blast from his past re-emerges and threatens to throw a wrench into his plans for the future. Will his bond with the new woman in his life be endangered? Tempted by old and familiar love into leaving the only safe harbor he has known, Jim is forced into making choices that could forever affect the new life he has chosen for himself.