Gun Crazy Volume 1 – Jim Nash Short Story Collection #1, available at all of the platforms on the sidebar at the right, includes the following short stories in the Twisted Sisters series:

Twisted Sisters
Detective Jim Nash has a problem. He has a murder victim in an alley and a dead woman in his bed. His own homicide division wants to charge him with murder. To say he’s got serious commitment problems would be an understatement. He’s on the lookout for twins, but he doesn’t want to date them. He wants to know who murdered them. First in the Twisted Sisters series.

Twisted Sisters 2 : Sleeping with a .45 – Detective Nash still has a couple of problems. He doesn’t know who killed the woman found dead in his bed. As if that wasn’t enough, someone is trying to kill him, and the killer’s methods aren’t very inventive. In fact, they’re pretty old-fashioned. His boss says he’s too close to both crimes and won’t permit him to investigate. The women in his life fare only a little better. Lucy and Zelda narrowly escape an assassination attempt. Second in the Twisted Sisters series.

Twisted Sisters 3 : Marina Mystery – A dead body introduces Detective Jim Nash to Coroner Allie Sands. Despite warnings from just about every woman working in the same building with her, Allie throws caution to the winds while helping Jim solve a murder. If you have read Twisted Sisters One and Two and are wondering how Jim and Allie met, this short story explains it all. Third in the Twisted Sisters series.

Included in Gun Crazy #1 are three shorts for the beginning of the Jim Nash Adventures series:

Pirate Cay – Jim Nash is headed for a long-awaited vacation in the Florida Keys when he checks his messages and discovers that an old flame needs his help. After a brief consult with the new woman in his life, Jim heads west to Panama Cay where he becomes embroiled in the rough seas and rocky shores of drugs, guns and money. First Jim Nash Adventure.

Thrill Kill Jill : Lost and Found – Retired detective Jim Nash is headed for a much-needed vacation with the two favorite women in his life. When he pulls off the highway into a rest stop, his girlfriend disappears without leaving a trace. Left to his own devices when the local PD refuses to let him file a missing persons report, Nash pulls out all the stops in his attempt to find the missing woman all by himself. Second Jim Nash adventure.

Greetings from Key West – Allie manages to talk Jim into a vacation in the Keys, where trouble finds them once again when they cross paths with a woman and her little girl being harassed by the locals. It’s not long before Zelda’s tracking abilities are called upon to restore things as they should be. Third Jim Nash adventure.

Gun Crazy Volume 2 – Available at all of the platforms on the sidebar at the right. Following in the footsteps of the first Gun Crazy volume, above, this edition is a collection of another four Jim Nash Adventure stories.

Lost Paradise #4 – Jim and Allie end up investigating a double homicide while vacationing on an island resort paradise owned by a venture capitalist Jim once cleared of a murder charge.

No Angels #5 – Jim is tasked by an old friend for assistance in cleaning up part of a gunrunning operation created by government mismanagement. He dives full throttle into Mexican waters, only to encounter the mysterious yacht Captain and crew that will transport him to his rendezvous with trouble and death.

Mexico Gamble #6 – A beautiful woman. A knife-throwing sister. An unpaid debt. Jim Nash is long on memory and short on forgiveness in this Mexican adventure featuring boats, women, good times, and bad fortune for at least one of his girlfriend Allie’s former employees.

No Picnic #7 – Jim is back in Mexico to come to the aid of a former flame that just happens to be handy with a knife. This time, he’s starting out with a boatload of trouble already on board. Two women who won’t allow him to say no to their demands insist on coming along for the ride. It’s a foregone conclusion that this trip will definitely not be going well for Jim.

No Way Out – Frank Ross is riding hard and putting a lot of towns in his rear view mirror as fast as he can. Here are four of them all in one place. 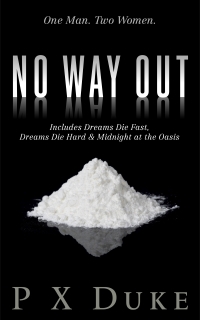 Dreams Die Fast – Frank Ross spent the winter on the Baja riding his motorcycle under sunshine and blue skies. Now it’s spring and he’s headed home, but bad luck encountered in a casino parking lot has left him stuck waiting for parts in a small, isolated town on the west side of the Salton Sea just 70 miles north of the Mexican border. With nothing to do but kill time, Frank accepts an invitation for a home-cooked meal. Before he knows it, he’s knee-deep in cartel drugs with a woman itching to pull the trigger on the gun she has pointed at his back.

Dreams Die Hard – Frank Ross is heading towards the anonymity of the bright lights and big city in an attempt to make good his escape from cartel sicarios. He’s got a reformed junkie riding bitch on the back of his motorcycle. Someone is throwing Molotov cocktails at them—and Frank doesn’t even drink. When his ride ends in the parking lot of a strip club, the seedy edge of the city finally catches up, forcing Frank to dig deep within to triumph over drugs, greed, arson and murder.

Dreams Never Die – Frank Ross has had his fill of the big city and bright lights. On his way to the Colorado, he catches sight of a diner in a small high-desert town he’s passing through. His decision to stop in for pie and coffee is rewarded when the friendly waitress tells him about the job posting next door. He fills out an application for a part-time job in the old-school bike shop, and his life is forever changed when he accepts.

Midnight at the Oasis – Frank Ross is headed down Mexico way, but first he must escape the high desert and the clutches of a sweet-talking, nimble little thing that has spun her web and led him down the road to good intentions gone bad. Following a trial by fire, Frank manages to get back on the road, but not before narrowly escaping a damsel in much distress when he refuses to take her along for the ride. Some adult content.

Rescue Me – Harry never seems to tire of reaching out to pluck his wife and the wife of his best friend out of trouble. Read about how adept both he and his best friend, Mike, have become at doing it while retaining their sanity.
Dead Reckoning – During Harry’s well-deserved R&R on mainland Mexico, he picks up something he doesn’t own that forces him to flee across the Sea of Cortez to the Baja. While hiding out on an isolated beach, two mysterious gringas show up to complicate Harry’s life by attempting to implicate him in their own scheme, resulting in a mad dash up the Baja to escape the consequences of their actions.

Long Way Home – When Harry’s ex-wife, Sasha, and their daughter accompany her oil-company boyfriend on a working vacation to Africa, the trio goes missing. They get out a call for help that will lead Harry on an air and ground chase across the Horn of Africa to rescue his family before kidnappers can move them to their den on the Indian Ocean.

Payback – Harry’s comfortable family life is turned upside down when he learns that a former comrade long thought dead is alive and asking for help.

Lie Cheat Steal – The girls might be back in town, but that doesn’t mean that everything is going their way. In this sequel to Payback, Sasha’s drug-dealing past finally catches up to her, putting the lives of her husband and family and her closest friends in mortal danger.